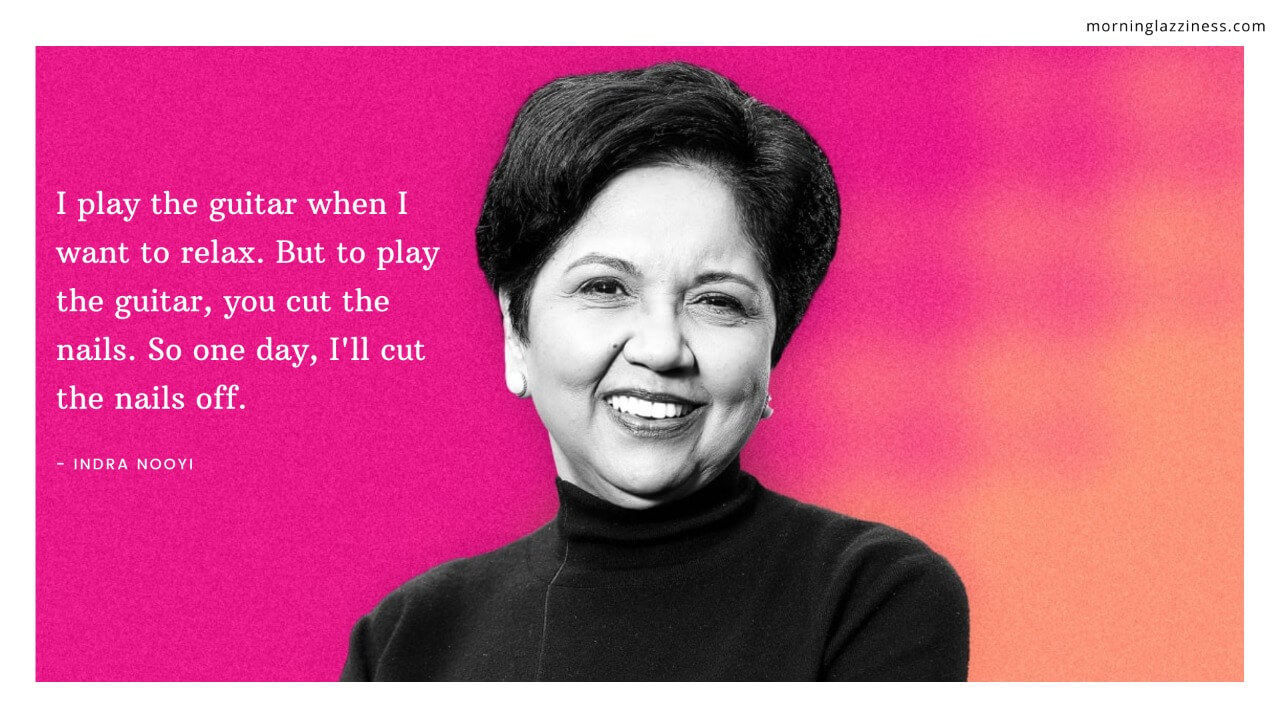 A self-made woman, Indra Nooyi, is an Indian-born American businesswoman. She was instrumental in the lucrative restructuring and diversification of soft-drink manufacturer PepsiCo, Inc.’s brands. She served as the company’s CEO from 2006–18 and chairman of the board from 2007–19.

Indra Nooyi’s journey of emerging as one of the top women corporate leaders in the world of our times is an extraordinary and inspiring story of hard work and determination. She is a single woman of color who went to the United States to realize her dreams despite her biases. This is what Nooyi has to say about different aspects of life and career.

Read the best thought-provoking and inspirational quotes of INDRA NOOYI.

“When you assume negative intent, you’re angry. If you take away that anger and assume positive intent, you will be amazed. Your emotional quotient goes up because you are no longer almost random in your response.”– Indra Nooyi

“Leadership is hard to define and good leadership even harder. But if you can get people to follow you to the ends of the earth, you are a great leader.” – Indra Nooyi

“To be a CEO is a calling. You should not do it because it is a job. It is a calling, and you have got to be involved in it with your head, heart, and hands. Your heart has got to be in the job; you got to love what you do; it consumes you. And if you are not willing to get into the CEO job that way, there is no point getting into it.” – Indra Nooyi

“Most companies target women as end-users, but few are effectively utilizing female employees when it comes to innovating for female consumers. When women are empowered in the design and innovation process, the likelihood of success in the marketplace improves by 144%!”- Indra Nooyi

“As a leader, I am tough on myself and I raise the standard for everybody; however, I am very caring because I want people to excel at what they are doing so that they can aspire to be me in the future.” – Indra Nooyi

“Each and every one of us has unknowingly played a part in the obesity problem.” – Indra Nooyi

“I’m very honest – brutally honest. I always look at things from their point of view as well as mine. And I know when to walk away.” – Indra Nooyi

“Just because you are CEO, don’t think you have landed. You must continually increase your learning, the way you think, and the way you approach the organization. I’ve never forgotten that.” – Indra Nooyi

“I grew up in a Hindu household but went to a Roman Catholic school. I grew up with a mother who said, ‘I’ll arrange a marriage for you at 18,’ but she also said that we could achieve anything we put our minds to an encourage us to dream of becoming prime minister or president.” – Indra Nooyi

“Every year in consulting is like three years in the corporate world because you have multiple clients, multiple issues – you grow so much.” – Indra Nooyi

“When I came to America in 1978, I was a huge sports fan – the problem was, my sport was cricket. Shockingly enough, no one wanted to talk cricket with me!” – Indra Nooyi

“When it comes to women, there has been a tendency to define women in sports in the context of their relationships – they watch games because their husbands watch. They’re interested because their kids play a sport. They buy tickets to a sporting event because it’s a way to spend time with family.” – Indra Nooyi

“I pick up the details that drive the organization insane. But sweating the details is more important than anything else.” – Indra Nooyi

“But the good news was that my elder sister refused to get married straight away and I couldn’t get married until she did so I had the license to go off and dream.” – Indra Nooyi

“After PepsiCo, I do want to go to Washington. I want to give back.” – Indra Nooyi

“Not only do we have to change the food we eat… we have to educate people about what they can eat appropriately.” – Indra Nooyi

“My guilty pleasures are the websites where you can look at the fashions and see how different outfits will look. You can even take a picture of yourself and download it and play with the fashions! I love playing with these websites to see what I can learn.” – Indra Nooyi

“I’ve been around the bend in corporations.” – Indra Nooyi

“There will never be a replacement for that ongoing physical contact. But I don’t think blogging is meant to replace the face-to-face of friendships and meetings. Blogging is a way to keep in touch with a larger group of people on an ongoing basis, in a more efficient way.” – Indra Nooyi

“What I would not do is flaunt my Indianness by wearing a saree to work every day, because it distracts from the job. So, I would not do that. When in Rome, do as the Romans do. Social events are different. If I feel comfortable in a saree for a social event, I wear it.” – Indra Nooyi

“When you have to do as much as women do, the Internet allows you to – from home – figure out a way to extend your reach and power in the world. It allows you to do what job you’ve done traditionally, and create aspirations by carrying on a job and using the Internet to amplify everything you’re doing.” – Indra Nooyi

“Before blogs, it was all about physical presence. We used to send out videos and audiotapes to communicate. Blogging and the Internet allow us to engage in a lot more real-time conversations as opposed to a one-way dump of information or a message.” – Indra Nooyi

“PepsiCo did not have a woman in the senior ranks, nor a foreign-born person who was willing to think differently.” – Indra Nooyi

“I asked my parents for permission to study in America and they were so sure that I wouldn’t get in and get a scholarship that they encouraged me to try. So I applied to Yale and got an excellent scholarship. I then worked for the Boston Consulting Group for six and half years.” – Indra Nooyi

“Blogging and the Internet allow us to engage in a lot more real-time conversations as opposed to a one-way dump of information or a message.” – Indra Nooyi

“I read every country’s perspective on an issue. I also play many games like Bridge, Scrabble, and Sudoku online.” – Indra Nooyi

“By five or six, when the heels start to hurt, I kick off my shoes and walk bare feet. But that’s not a big deal. Nobody else is at the office at that time, and as for singing loudly, I don’t sing loudly. I might hum a tune at times when I am thinking about something, but that’s all fine.” – Indra Nooyi

“Lots are written about how ‘she shows up at board meetings in the saree.’ My God, I have never worn a saree to board meetings; people play it out in different ways. I think I have never shied away from the fact that I am an Indian, and I don’t intend to, but you can be at home with both cultures.” – Indra Nooyi

Want to inspire someone in your life today? Consider sharing this list with them and looking for more inspirational quotes? We’ve got a post for that.