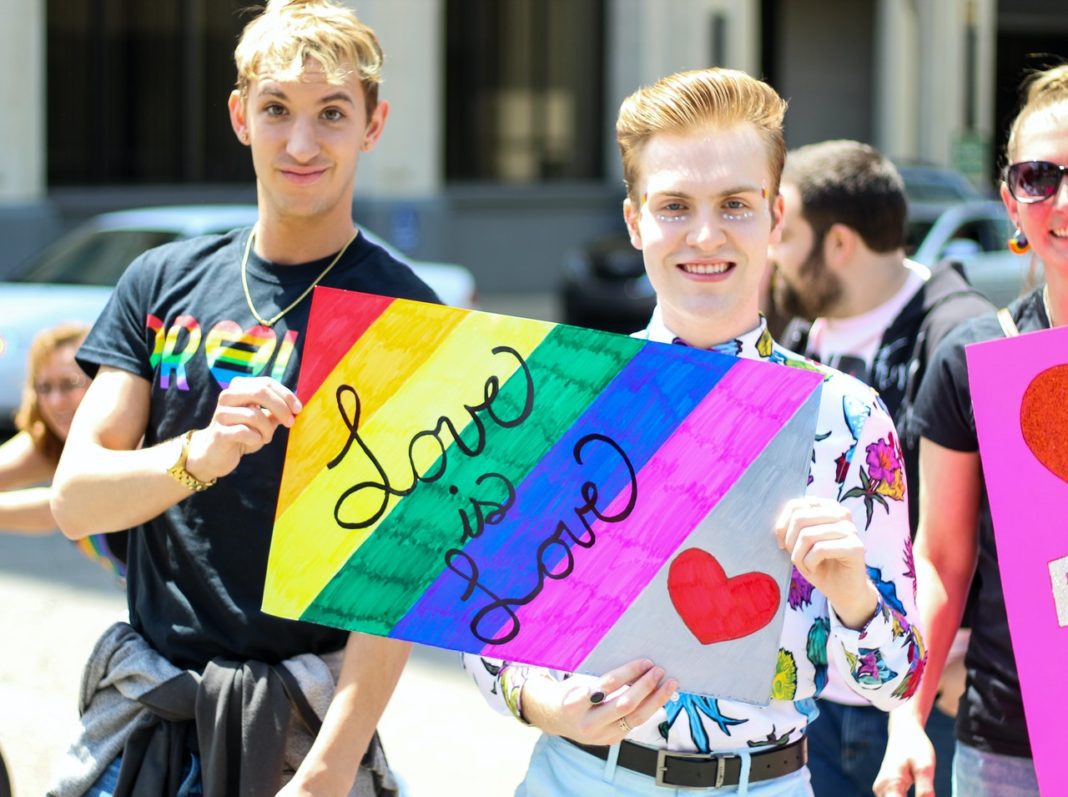 LGBTQ is an initialism that stands for lesbian, gay, bisexual, transgender, and queer. The LGBTQ community is a diverse and open-minded collection of people who share a common experience. They advocate for freedom, acceptance, and the right to live their lives without judgement.

Being LGBTQ is not a ‘problem’, nor is it a ‘choice’ as such. Nonetheless, most LGBTQ people remain closeted, fearing discrimination from their families, peers and community in general, who might see homosexuality as shameful as it’s still not understood in culture.

LGBTQ people often face rejection from various spheres of society like jobs, marriages etc. Our goal is to create an environment where everyone has the opportunity to experience acceptance, develop meaningful relationships and achieve personal growth while being treated with dignity and respect.

The LGBTQ community is open to everyone, regardless of sex, gender identity, sexuality and relationship status. We strive to create an inclusive space that reflects our commitment to diversity, inclusivity, and acceptance.

Let’s read some quotes by eminent personalities and scholars which focus on the normalcy of the LGBTQ community.

3. “The next time someone asks you why LGBT Pride marches exist or why Gay Pride Month is June tell them, ‘A bisexual woman named Brenda Howard thought it should be.’” — Brenda Howard

4. “I learned compassion from being discriminated against. Everything bad that’s ever happened to me has taught me compassion.” — Ellen DeGeneres

5. “What is straight? A line can be straight, or a street, but the human heart, oh, no, it’s curved like a road through mountains.” — Tennessee Williams

6. “Equality means more than passing laws. The struggle is really won in the hearts and minds of the community, where it really counts.” — Barbara Gittings

7. “Never be bullied into silence. Never allow yourself to be made a victim. Accept no one’s definition of your life; define yourself.” — Harvey Fierstein

8. “All of us who are openly gay are living and writing the history of our movement. We are no more—and no less—heroic than the suffragists and abolitionists of the 19th century; and the labor organizers, Freedom Riders, Stonewall demonstrators, and environmentalists of the 20th century. We are ordinary people, living our lives, and trying as civil rights activist Dorothy Cotton said, to ‘fix what ain’t right’ in our society.” — Sen. Tammy Baldwin

10. “There are worst things in life than kissing boys.” — Benjamin Alire Sáenz

11. “We need, in every community, a group of angelic troublemakers.” — Bayard Rustin

12. “Our society needs to recognize the unstoppable momentum toward unequivocal civil equality for every gay, lesbian, bisexual, and transgender citizen of this country.” — Zachary Quinto

13. “I’m living by example by continuing on with my career and having a full, rich life, and I am incidentally gay.” — Portia de Rossi

14. “Every gay and lesbian person who has been lucky enough to survive the turmoil of growing up is a survivor. Survivors always have an obligation to those who will face the same challenges.” — Bob Paris

15. “To love oneself is the beginning of a lifelong romance.” — Oscar Wilde

16. “When you put love out in the world it travels, and it can touch people and reach people in ways that we never even expected.” — Laverne Cox

18. “My silences had not protected me. Your silence will not protect you.” — Audre Lorde

20. “It is absolutely imperative that every human being’s freedom and human rights are respected, all over the world.”— Jóhanna Sigurðardóttir

LGBTQ Quotes To Come Out and Gain Acceptance in the Society

LGBTQ, or “queer” as those in the community may refer to themselves, is an acronym referring to the lesbian, gay, bisexual, transgender, and questioning communities. The LGBTQ-plus community is a vibrant collection of individuals bound together by shared experiences and history — both good and bad — that can help anyone struggling with their identity find a place where they belong.” The current movement has strong ties to the Stonewall riots of 1969, which occurred in New York City and are widely credited with beginning the modern gay rights movement in the United States.

Stay informed, Speak Up and Be Honest. Let’s be an ally to LGBTQ people and support them to gain the rights and dignity that they deserve. Let’s read some quotes which help us to broaden our mindsets and view them as normal human beings in society.

21. “Love him and let him love you. Do you think anything else under heaven really matters?” — James Baldwin

22. “Gender and sexuality are so fluid. It’s OK to change your mind a million times and figure out what works for you. It’s OK to take your time.” — Amandla Stenberg

23. “But I’m not a saint yet. I’m an alcoholic. I’m a drug addict. I’m homosexual. I’m a genius. Of course, I could be all four of these dubious things and still be a saint.” — Truman Capote

24. “The only queer people are those who don’t love anybody.” — Rita Mae Brown

25. “We deserve to experience love fully, equally, without shame, and without compromise.” — Elliot Page

26. “I think being gay is a blessing, and it’s something I am thankful for every single day.” — Anderson Cooper

27. “Nature made a mistake, which I have corrected.” — Christine Jorgensen

28. “This community has fought and continues to fight a war of acceptance, a war of tolerance and the most relentless bravery. You are the definition of courage, do you know that?” — Lady Gaga

29. “When all Americans are treated as equal, no matter who they are or whom they love, we are all more free.” — Barack Obama

30. “I’ve been embraced by a new community. That’s what happens when you’re finally honest about who you are; you find others like you.” — Chaz Bono

31. “Openness may not completely disarm prejudice, but it’s a good place to start.” — Jason Collins

32. “What I preach is: People fall in love with people, not gender, not looks, not whatever. What I’m in love with exists on almost a spiritual level.” — Miley Cyrus

33. “The single best thing about coming out of the closet is that nobody can insult you by telling you what you’ve just told them.” — Rachel Maddow

34. “Stonewall represented, absolutely, the first time that the LGBT community successfully fought back and forged an organized movement and community.” — Mark Segal

35. “Being born gay, black and female is not a revolutionary act. Being proud to be a gay, black female is.” — Lena Waithe

“As we celebrate Pride Month, we remember that LGBTQ rights are still under attack all over the world. Federally, transgender people are still barred from serving openly in our military, LGBTQ workers’ rights remain unprotected in most states, and politicians continue to demonize, stigmatize and even criminalize the lives of the LGBTQ community. As a community and a nation, we must stay focused on achieving equality for all Americans, who deserve access to the same rights and protections as every other hardworking person in this country. This month and every day, we also celebrate all that makes us proud: our history of activism, our belief in equality for all people regardless of race or gender identity, our perseverance in the face of adversity, and our commitment to progress.

Let’s read some quotes to commemorate years of struggle for civil rights of the LGBTQ community this Pride Month.

36. “Love demands expression. It will not stay still, stay silent, be good, be modest, be seen and not heard, no. It will break out in tongues of praise, the high note that smashes the glass and spills the liquid.” — Jeanette Winterson

37. “The richness, beauty and depths of love can only be fully experienced in a climate of complete openness, honesty and vulnerability.” — Anthony Venn Brown

38. “We should indeed keep calm in the face of difference, and live our lives in a state of inclusion and wonder at the diversity of humanity.” — George Takei

39. “You don’t have to be gay to be a supporter—you just have to be a human.” — Daniel Radcliffe

40. “Your judgments about another person say more about your own character than the character of the person you’re pointing a finger at.” — Alaric Hutchinson

41. “I believe that no one should ever have to choose between a career we love and living our lives with authenticity and integrity.” — Selisse Berry

42. “Personally, coming out was one of the most important things I’ve ever done, lifting from my shoulders the millstone of lies that I hadn’t even realized I was carrying.” — Sir Ian McKellen

43. “There will always be enemies. Time to stop being your own.” — Larry Kramer

44. “There’s nothing wrong with you. There’s a lot wrong with the world you live in.” — Chris Colfer

45. “From a religious point of view, if God had thought homosexuality is a sin, he would not have created gay people.” — Howard Dean

Ellen Page has been an inspiration to many LGBTQ youths. The actress used her acceptance speech for the 2015 Vanguard Award at the HRC’s National Dinner. She said that the right to live an “authentic life” is just that — a right — and cited victories like the marriage equality ruling as an example of the kind of things the “truly brave” LGBTQ activists have accomplished. Thus here is a motivational story for all the members of the LGBTQ community. They can derive inspiration and courage to come out and reveal their identities without shame or fear in front of society at large.

46. “We have to do it because we can no longer stay invisible. We have to be visible. We should not be ashamed of who we are.” — Sylvia Rivera

47. “To be fully seen by somebody, then, and be loved anyhow—this is a human offering that can border on miraculous.” — Elizabeth Gilbert

48. “I’m a young, bisexual woman, and I’ve spent a large part of my life trying to validate myself—to my friends, to my family, to myself—trying to prove that who I love and how I feel is not a phase.” — Halsey

50. “The important thing is not the object of love, but the emotion itself.” — Gore Vidal

51. “Love him and let him love you. Do you think anything else under heaven really matters?” – James Baldwin

52. “If I wait for someone else to validate my existence, it will mean that I’m shortchanging myself.” – Zanele Muholi

53. “I am proud, that I found the courage to deal the initial blow to the hydra of public contempt.” – Karl Heinrich Ulrichs

54. “My silences had not protected me. Your silence will not protect you.” – Audre Lorde

55. “Every LGBTQ+ refugee has a unique situation—but the fear and pain they endured before coming to Canada is universal.” – Arsham Parsi