Meet Lainey An Astonishing Woman, Who Introduced the World With ‘Goat Yoga’ 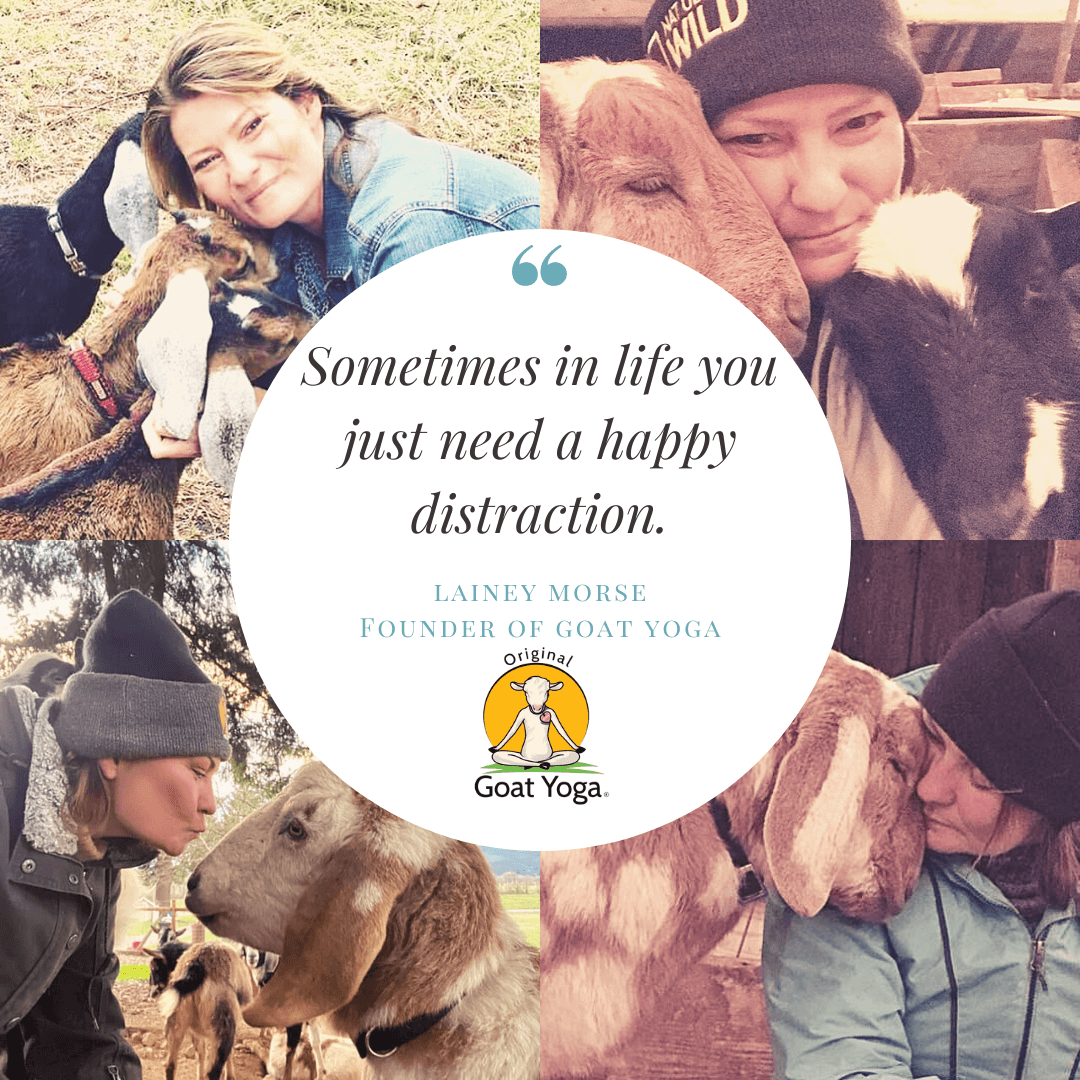 As a part of the Morning Lazziness series about strong women leaders who attained success with their incredible ideas, I had the pleasure of interviewing Lainey Morse.

The founder and CEO of ‘Original Goat Yoga,’ Lainey Morse, is an astonishing woman who introduced the world to the wonders of goat yoga in 2016. It contends to provide its clients a joyful experience that improves mental and physical health through the healing power of animals and the economic development of rural households and farms worldwide through agritourism.

Albeit there were no business plans or focus groups to point the way, something which started with six goats and self-perseverance when her world was shattering around her, Lainey, with her 20 years of marketing experience, made this business model focused on helping others and start their own goat yoga enterprise, a notable organization.

Through the years of ‘farming happiness’ by delivering animal therapy in the form of goats and rural vistas, she has made hundreds of appearances in publications and media outlets including CNN, The NY Times, Time Magazine, Wall Street Journal, NPR, BBC, and many more.

Many thanks for doing this for us; please let our users know about yourself and Original Goat Yoga?

My name is Lainey Morse, and I’m the Founder of the Original Goat Yoga. My idea went viral in 2016 when I combined Goats and Yoga. Since we officially launched as a business, we now have ten locations with more on a waiting list to license our brand and become satellite locations. We now estimate that there are over 500 goat yoga businesses all over the world from Australia to Switzerland, and it’s become an over 10 million dollar industry worldwide.

Who inspires you to start this Original Goat Yoga?

Goat Yoga started as a way for me to give myself a happy distraction with my goats. I had been diagnosed with a disease, I was going through a divorce, and I found it therapeutic to spend time around my goats. I started something called Goat Happy Hour, and I would invite people over that were stressed or going through a hard time. Everyone left happy. One of the people that came to that event was a yoga instructor, and she suggested we do a yoga class out in my field. I laughed and warned her the goats would be all over the humans, and she said… “GREAT!”

We started marketing “Goat Yoga,” and it just took off with a waitlist of over 2,400 people from all over the world to attend a class. The media ran with it, and it’s appeared in thousands of media publications all over the world. Since how long you are practicing Yoga? I’m limited physically by my disease, and I don’t actually practice Yoga. I do all the backend business of each location. Marketing, Social Media, Customer Service, Event Coordination, and my locations put on amazing events. And of course, what are the benefits of Goat Yoga? Goat yoga is great not only for physical health, but we are more focused on mental health. Our practice is a very general level of Yoga since most people that come to our classes have never been to a yoga class.

Goat Yoga gives people a happy distraction from the stress of life. When you get outdoors, surround yourself with lovable therapy animals and disconnect from stress, it’s a very powerful mental health tool to keep our brains focused on a joyful and happy experience. It’s not healing diseases, but it is making people forget about them, even if for a little while. Being around animals has been scientifically proven that increases oxytocin levels (the feel-good hormone) and bring down blood pressure and heart rates. Pair that with Yoga which brings you into the present moment and is good for your body; it makes the perfect pairing.

How do you believe in solving people’s problems with this inspirational Goat Yoga?

I said earlier, it’s not healing diseases, but it does give people a happy distraction from the stress of life. Goat Yoga is the newest form of a mental health service, much like going horseback riding or walking your dog. You’re getting outdoors and being with animals is so beneficial.

Can you share a story with us about what brought you to this specific career path?

Original Goat Yoga wasn’t anticipated. There were no business plans or focus groups to point the way. However, its core existed in the form of a nightly farm walk that many visitors came to know as “Goat Happy Hour.” Those walks were so important to me as I went through struggles in my life, and it led me to understand that I was essentially ‘farming happiness’ by delivering animal therapy in the form of attention-seeking goats and rural vistas. Goat Yoga came shortly after, and I ended up quitting my corporate job of ten years to pursue a new career!

Can you tell us the most interesting story that happened to you since you began your career?

I think going viral is the most interesting thing that has happened to me in my career. If it wasn’t for that, goat yoga wouldn’t exist outside of my farm in Oregon. I had sent pictures of my first class to a magazine called “Modern Farmer” just thinking that they would think it was a cute story for their readers. They responded within a few minutes and did the first story on goat yoga. After that was published, I was awakened by my phone ringing off the hook at 4 AM on a Sunday morning. When I answered, it was a journalist from India. From there, it snowballed, and we’ve appeared in thousands of media outlets internationally, from The New York Times, Wall Street Journal, People Magazine, CNN, and many more.

There is no shortage of good ideas out there, but people seem to struggle in taking a good idea and translating it into an actual business. How did you overcome this challenge?

I feel like I overcame that challenge by accident. If it wasn’t for going viral, my idea wouldn’t be all over the world now. I think the second thing that helped was my tenacity. So many people thought I was absolutely crazy, believing that I could open a business around goat yoga. I didn’t listen to those people and kept marketing my idea because I believed that it truly could help people with mental health issues.

What helps you stay driven and motivated to keep going in your business?

Believing that what I am selling truly works to improve people’s mental health. Since I have anxiety issues, I know that it helps because it helps me every single day. I see how many others are now opening goat yoga businesses, and they are selling out classes. People love it, and it’s not going away anytime soon!

How do you keep yourself motivated and humble throughout the day?

Do you practice meditation and Yoga? I continue to do my Goat Happy Hour farm walks several times a day. It’s how I start my day, and it’s how I end my day. I want to share that experience with others, and that’s what keeps me motivated.

What are your “5 Things I Wish Someone Told Me Before I Started” and why?

1.) Trademark your idea ASAP. I never realized that people all over the world would start their own business and name it the same exact thing that I named mine.

2.) Purchase all the domain names that you can think of that are associated with your idea. I had no idea that people would try to claim credit for coming up with the idea and that they would be so cutthroat and competitive. Because I didn’t even think to purchase the main domain names, we now have another goat yoga business that claims credit for inventing it, and they are the type of business that I wouldn’t want to be associated with. Their style is very circus-like, from dressing goats in costumes (which they hate) to having huge classes, and so people don’t get that same therapeutic experience as if the class was smaller.

3.)Follow your gut and intuition. I’ve brought locations on that deep down inside; I knew they probably wouldn’t be the best partners because of location, personality type, etc. I wish I would have listened to my gut and not forced it because, in the end, they don’t usually pan out.

4.) Never give in to the big industries that want something for free. We’ve provided unique content for thousands of media around the world, and most of the time, you do not get paid for that. After several years of giving things away for free, we now require people to pay for our time and talent. We are a business and have expenses like everyone else; to ask for free events is insulting to our employees and licensees.

Has there ever been a moment when you thought to yourself, “I can’t take it anymore, I’m going to get a “real” job? If so, how did you overcome it?

NEVER! I realize that going viral does not happen to people normally. It was like winning the media lottery. I didn’t win the money lottery, so I still need to make that part happen.

How is your self-care routine?

It’s very important to my mental health that I get outdoors with my animals every single day. I start the day and end it with my animals. Physically it’s quite hard for me to exercise, but with my daily farm walks, I stay in shape both physically and mentally.

I think the secret of life is finding a happy distraction. When you are going through a hard time in life, whether it be a death in the family, sickness, depression, etc. No matter what it is, you need to find things that make you happy. My Mother just passed away a few months ago, and my parents have been married for 69 years.