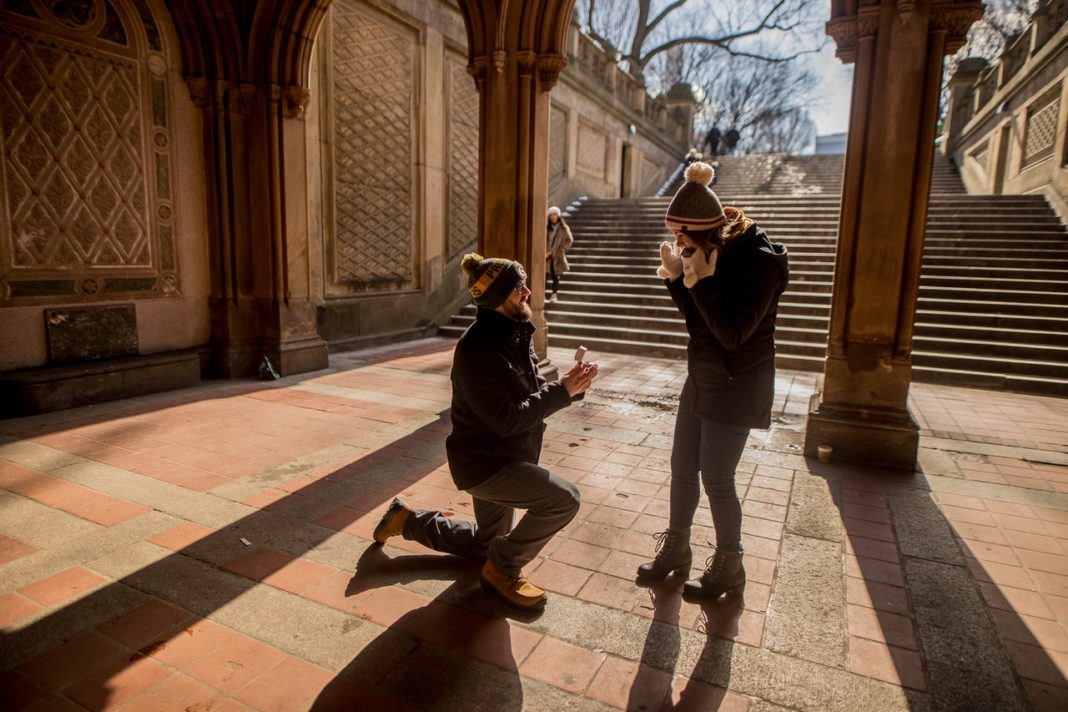 Three days back, the love of my life proposed to me, and my whole world changed. Every minute feels like goosebumps and butterflies tickling; I can’t just stop smiling. Does this happen to you?

When your partner proposes to you and your friend captures that romantic moment, literally it feels so happy! I agree to spend the rest of my life with someone who can tackle my mood swings, my bad hair day, and ponder love every day.

“At the Spring Festival family banquet a few years ago, we had a happy meal when suddenly he came over and hugged 99 roses and knelt on one knee to propose marriage. In front of all his relatives, my mind went blank for a while; he asked me to marry him, okay? I didn’t say a word. In the end, he stuffed the flowers into his arms in a foolish way. After a few minutes, I said one sentence: How much does it cost? I finally made everyone laugh, and I agreed to his proposal❤️.” – Sweet

“He proposed to me at the place where we first met. That place in itself evokes emotions and beautiful memories. Remember the day when our eyes met, it reminds me of what we looked like, what we talked about … He tried to make a remake of the same scene, he played me the same music that was on the radio on time. He wore the same wardrobe as that day. At such a moment he took out the ring and asked the famous question. No doubt I agreed!❤️” – Ashley Dolan

“My boyfriend proposed to me at the top of a mountain surrounded by beautiful forest and mountain scenery. I’m a photographer, so he told me that there was this spot that was perfect for taking photos. When we got to the top, he got down on one knee and proposed. It was perfect❤️.” – Megan Moore

“My husband proposed to me on December 30, 2009. We were skiing in Utah – and in lieu of the traditional bouquet of flowers and romantic dinner, my husband took the opposite approach! On our way up the mountain on a ski lift, he started sharing sweet stories about our relationship – and the further we climbed, the more I wondered why. About 3/4 of the way up the mountain, he pulls from his pocket a ring in a silver box and pretends to hand it to me (with bulky ski gloves). As I reached for it, HE DROPPED IT. And the look of pure panic in his eyes had me convinced he had just dropped the engagement ring somewhere on a mountainside. We rode the remainder of the way with hearts racing – until the ski lift pushed us off at the top of the mountain. With tears in my eyes, I started laughing immediately as he got down on one knee and pulled the REAL engagement ring from his pocket. The jerk had fooled me with a decoy!❤️” – Julie Navickas

“As huge Amazing Race fans, my husband sent me on an all-day Amazing Race adventure that included 15 locations, 34 friends and family members, fun, meaningful “tasks” I had to complete and 8 hours of racing, all leading me to my forever finish line!

I thought we were going out for breakfast with my family but one by one, everyone disappeared with the exception of my sister.. who handed me my first clue. The Race was on. Though I had NO IDEA what was in store.

Over the course of 8 hours, I was sent to various locations that all held some special meaning in the course of our relationship. At each spot, I was greeted by a few surprise visitors (a total of 34 close friends and family members in all, many who flew in from all over the country) to help me execute my task and give me my next clue. Each task also held some special meaning – of course!

It all led me to the mat, where all the friends and family that had participated were lined up cheering me on… and Jeff was waiting for me inside the cabana to propose.

Naturally, our entire wedding took on the theme of the Amazing Race, with our invitations in special homemade Amazing Race envelopes, clues for the guests, roadblocks, detours, and a lot of fun❤️.” – Megan Bendtzen

“My husband and I are from 2 different countries and we dated extremely long distances. I traveled to Australia to see him during my summer vacation as a teacher and he planned out 6 weeks traveling through Australia. Our first stop was Tasmania and after Hobart, we drove to Freycinet National Park. The hike he wanted to do was closed so we drove around looking at some of the shorter hikes. He found a place he liked, by the lighthouse, and got down on one knee. Of course, I said yes, and as I was busy admiring my ring sparkle in the sunlight, a whale popped up in the water below❤️.” – Lanie

“Jim and I had both been widowed and were dating for marriage with our combined five kids. A counselor gave us this assignment:  Each writes a list of what you have to offer a marriage mentally, physically, emotionally, and physically, then compares your lists. We drove to our favorite romantic cliffside restaurant in Laguna Beach for breakfast to share our lists. Before we got out of the car, Jim put his arms around me and said, “I just want you to know that no matter what we said on our lists, I want to marry you!” I wasn’t ready to answer, as I was still too scared so I made him wait. So a few days later, he came to pick me up for a movie date. I was ironing the sweater I planned to wear while he looked through the newspaper for shows. I said, “You know that question you asked me a few days ago?” He looked up at me and I said, “Well, the answer is yes!” He jumped up and lifted me up and hugged me in the air! We barely watched the movie, just grinning at each other like Cheshire cats!❤️” – Nancy Landrum

I flew over from Paris and my boyfriend at the time surprised me with a trip to Guatemala from Toronto where we backpacked for 2 weeks. Just before the flight he bought a diamond ring which he hid in his sock. We hiked the San Pedro volcano near Lake Atitlan and he proposed me on top of the volcano as he pulled the ring out of his sock. It was time for him to get it out because the diamond had rubbed the wrapping and it was starting to dig painfully into his toes.

Guatemala was near the end of a civil war so we had to wrap the ring and hide it back between his toes until the end of the trip… so as not to be robbed by the roaming bandits.  He was able to put the ring on my finger for good when we were on the plane going back to Canada. We’ve had an epic most interesting life and are still madly in love❤️.” – Gaia Orion

“I met my husband on Instagram four years ago. He was a good-looking, decent guy so I accepted his request. We were complete strangers who became friends after just a few chats and used to share our daily routines with each other. We started caring for each other and would wait for each other’s messages more often within a few weeks. One day, my husband, who was a friend at that time, proposed to me online and I also said yes. The best part of our story was, we never met in person, didn’t see each other’s faces before saying yes, or even never spoke over the phone. Now we are happily married and have a son❤️.” – Gagandeep